California’s Love Affair with the Bungalow

There’s a lot to love about historic bungalows, but they may contain lead and asbestos. 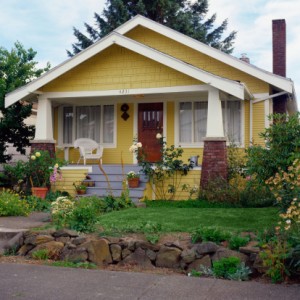 If you love historic homes, no doubt you have already been introduced to the California Bungalow. These charming little cottages dot the residential streets of many communities in California and across the country.

The name “bungalow” comes from Bengali, India, where people built small homes with curved roofs that touched the ground. The result was a structure that looked like an overturned ship, or “banggolo.” As they colonized India, the British adopted the basic structure of the banggolo, changing it a bit to suit their needs and preferences. A hipped roof, wooden doors, glass windows, and a wrap-around porch became standard.

In the 1900s, the bungalow came to America and quickly became immensely popular. These small, simple buildings could be built quickly, easily, and inexpensively from kits shipped by rail. This made bungalows the style of choice for many Americans relocating to California after WWI. They continued to be extremely popular up until hard economic times in the 1930s brought home building to a virtual standstill.

Bungalows have been enshrined in the national consciousness as the quintessential American home by countless Hollywood productions. The large number of bungalows in the LA area as well as their roomy floor plans made them a natural choice for producers needing to film scenes set in an “anywhere USA” type home.

Today, owning a historic bungalow is a point of pride for many Americans. However, this type of home ownership does have its perils.

Bungalows were built in the heyday of lead paint usage. Public health officials actually encouraged the use of lead paint for interior surfaces because it was highly durable and could be washed to help maintain sanitary conditions in the home. In subsequent decades, bungalow owners probably kept slathering on the lead paint, right up until the 1970s. As these old layers of paint age, they release dust that can be very harmful to the development of children as well as the health of adults. It is necessary to hire a qualified lead safe contractor such as H2 Environmental to perform a lead inspection and facilitate your remediation efforts.

Bungalow homes may also contain asbestos, which was widely used in insulation, tile, and even paint up until the 1970s. While asbestos-containing materials probably didn’t pose any risk to the original owners, over the years these materials will break down, creating dust and fibers that can be very dangerous to later generations. If you are planning any remodeling work on your bungalow, it is vital to get an asbestos inspection first, to avoid damaging asbestos-containing materials and contaminating your home.