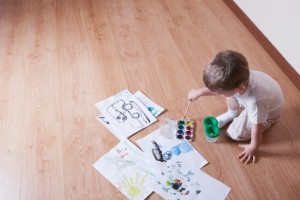 The billion-dollar flooring company Lumber Liquidators is being sued for selling Chinese-made toxic formaldehyde-tainted flooring materials in California and other US states. The CBS show “60 Minutes” with host Anderson Cooper investigated Lumber Liquidators and interviewed its founder and chairman, Tom Sullivan, and found that the tainted flooring has likely been installed in hundreds of thousands of homes across the US.

Where is the Formaldehyde?

How Did they Find Out that it’s Toxic?

The March 1 “60 Minutes” program featured concerned customer Richard Drury, who sent more than 150 boxes of laminate flooring for lab tests. The results were that formaldehyde levels were on average 6–7 times beyond the state standard, with some that were as much as 20 times the permissible amount. “60 Minutes” also sent undercover investigators to three Chinese factories in Changzhou, where Lumber Liquidators flooring is produced, and spoke with actual employees there who confirmed that the flooring didn’t meet California’s legal standards for formaldehyde levels. Employees said that making flooring that met the standards would be much more expensive, slashing Lumber Liquidator’s profit margins.

Why Does it Matter?

“It’s a level that the US EPA (Environmental Protection Agency) calls polluted indoor conditions,” said Dr. Philip Landrigan of New York’s Mount Sinai Hospital, who specializes in environmental pediatrics and exposure to toxic chemicals. He went on to say that long-term exposure increases the risk of chronic respiratory irritation and asthma, especially in children.

On their website, Lumber Liquidators indicates that all of their flooring “meets or exceeds rigorous emissions standards.” But the lab testing that was recently done indicates that the flooring doesn’t even come close to meeting state law standards, including California’s toxic warning statute. When “60 Minutes” host Anderson Cooper shared the lab findings and investigators’ research with Tom Sullivan, Lumber Liquidators’ founder and chairman, he outright dismissed it. He said the methodology was invalid and that the company isn’t required by law to test finished products. He dismissed health and safety concerns by saying, “We get the price by low overhead, huge volume and being very efficient at what we do. And we’re never gonna sell something unsafe.” When Cooper pressed Sullivan at the end of the interview, Sullivan admitted that he might not know what’s going on with the toxic flooring materials found in his company’s factories, and that there would be an investigation immediately.

What Should You Do About it?